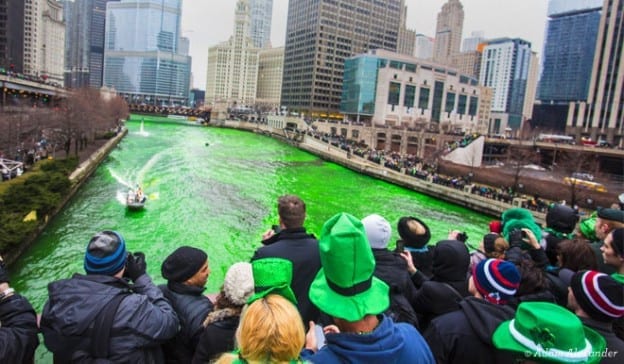 From Show Me Chicago on Chicago Now

By Carole Kuhrt Brewer, Monday at 7:30 am

Chicago is, hands down, the best place to celebrate St. Patrick’s Day, outside of the Emerald Isle. While other cities may dye water in a fountain green or paint a green stripe down the center of the street, Chicago turns the Chicago River, that runs through the center of town, a brilliant shade green that makes all others green with envy.

What: The Greening of the Chicago River.

How do they get that river so green?

Many, outside of the Windy City, have tried and failed.

The special formula that is used to turn the river a bright emerald green is a closely guarded secret. The annual  tradition has been amazing spectators for over half a century. And, not to worry, the 45 lbs. of dye they use is an eco-friendly vegetable dye.

When: The dyeing ceremony is scheduled to kick off at 9 am, Saturday, March 12th.

What: The Downtown Chicago St. Patrick’s Day Parade is one of the largest in the country. This year’s parade celebrates the Commemoration of the 100th Anniversary of the Easter Rising.

When: The parade begins at noon, Saturday, March 12 following the dyeing ceremony.

The South Side Irish Parade steps off at noon on Sunday, March 13th from 103rd and proceeds down Western Avenue to 115th Street.

Not to be left out, Northsiders have their own parade aptly called theNorthwest Side Irish Parade. This one also steps off at noon on Sunday, March 13th–so you have to pick your side–south or north–since they run simultaneously. The parade steps off at Onahan School (6634 W. Raven Street).

“Here’s to a long life and a merry one. A quick death and an easy one. A pretty girl and an honest one. A cold pint and another one!”

Chicago has more than its share of Irish Pubs and Bistros from downtown to the neighborhoods.

Get Your Irish Up

What: St. Patrick’s Festival. This annual fest offers something for all ages with large-scale, family-friendly fun featuring traditional and contemporary Irish music, dance, food and drink, children’s activities and an Arts and Crafts Fair.

Where: The Irish Heritage Center in the Fifth Province at 4626 N. Knox Avenue.

Chicago is serious about their corned beef–and there are many arguments as to who has the best. For our money, you can’t go wrong at  Manny’s (1141 S. Jefferson). In addition to their killer corn beef sandwiches, Manny’s offers a special St. Patrick’s menu loaded with Irish classics.

Please let us know how we can help you and a member of the Millennium Garages team will get back to you as soon as possible.